The City of Kingsburg is a Charter City nestled in the center of the San Joaquin Valley, halfway between Los Angeles and Sacramento. The City was originally established in 1873 as a railroad stop under the name “Kings River Switch”. During this time, many Swedish immigrants settled this new area. Even by 1921, the Swedish population was up to 94% within a given three-mile radius, this caused the community to be known as “Little Sweden”. This Swedish influence can still be seen in our City today in much of the City’s architecture. – cityofkingsburg-ca.gov

The Swedish Festival in Little Sweden 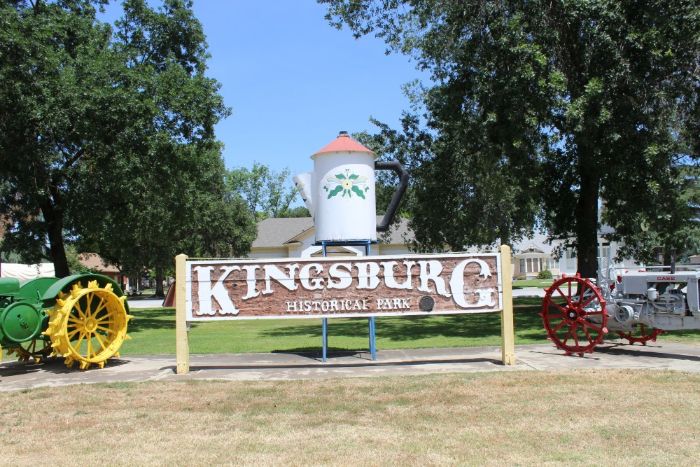 One of the unique landmarks in this community is the water tower shaped like an antique Swedish coffee pot. The Swedish Festival is one of the biggest and best known festivals that bring people in from all over the country. It’s held annually the third weekend in May. Different activities are lined up which includes the Swedish pancake breakfast, a parade, and the coronation of the festival queen. On Drapers Street, many booths, rides, and activities are set up all along the sides. Originally, the festival had been held on Friday, Saturday, and Sunday until its centennial in 2009, when it was demoted to Saturday and Sunday due to the declining economy.

Kingsburg CA is mostly surrounded by grape vineyards which produce mainly raisin and table grapes; however, in 2002 a large surplus of raisins and grapes drove the price for these commodities down to an all-time low. Farmers were forced to replant the fields with stone fruit or sell their land to home developers to help cope with the rising population in the area.

The city is the headquarters of Sun-Maid Growers of California – a privately owned American cooperative of raisin growers. It’s the largest raisin and dried fruit processor in the world, a cooperative made up of approximately 850 family farmers who grow raisin grapes within 100 miles (160 km) radius of the processing plant.

Kingsburg Historical Park is managed by the city’s Historical Society, a non-profit corporation that also manages the Historical Kingsburg Jail.

The Depot Museum first opened in the Southern Pacific Depot on California Street and was in operation from 1970 – 1984. In January of 1985, the museum was moved to the Clay School building. In 1974, the Society bought 8.9 acres of land on Sierra St. from Fridolf Anderson at a purchase price of $28,000, now officially named 2321 Sierra Street.

Here are some of the known displays in the museum and their year of arrival: